Love is in the air at this small but sweet little bazaar. Catering to the members and guests of the Chinese Swimming Club, handpicked vendors will showcase a gorgeous selection of treats and gifts.

Non members are welcome during the fair times, so do be sure to pop in and doing a little loved up shopping for the special one in your life.

Starting on Friday the 10th of Feb from 4pm to 8pm then continuing from 10am to 7pm both Saturday and Sunday, you have plenty of time to swing by for a little look. 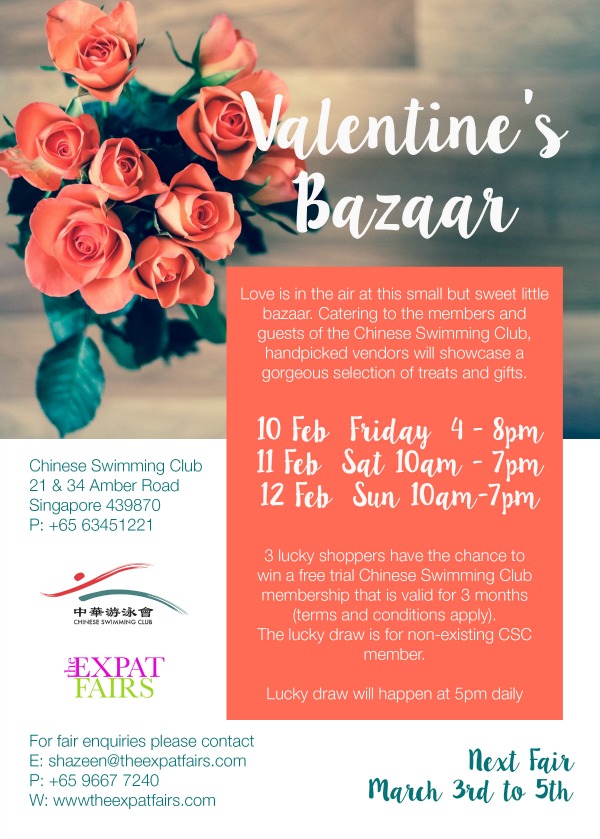 ABOUT CHINESE SWIMMING CLUB
The Chinese Swimming Club first started in 1905 by 9 energetic young men who had called themselves the “Tanjong Katong Swimming Party”. By 1909, the name “Chinese Swimming Club” was adopted and this is where the Club history begins. Swimming, both as a recreation and competitive sport, was growing in popularity in the Club. In the early years, swimming and water polo still took place in the open seas at high tide.
Subsequently, funds were raised to build pagars out into the sea to provide safe swimming for members and a venue for interclub competitions. In 1941, much to the excitement of the members, a new 3-storey Clubhouse as well as a proper 25m sea water swimming pool was opened.

By 1951, a full-sized Olympic swimming pool was completed and officially opened by Sir Franklin Gimson, the Governor of Singapore. The Club spared no effort in its expansion of facilities. Its current facilities include 2 Olympic-size swimming pools, an international standard water polo pool, 8 badminton courts and 3 rooftop tennis courts in addition to 2 squash courts. It also houses a 12-lane bowling alley and a mega gym for the fitness enthusiasts. The Club is 107 years old this year and has come a long way since its humble beginnings as the Tanjong Katong Swimming Party.

Its past Presidents include Mr Cheong Koon Seng, Mr Lee Kong Chian, Mr G H Kiat and Mr Soon Peng Yam. The current President is Mr Edwin Lee. The Club has an impressive track record of nurturing top national swimmers. The Golden Era for swimming in the Club is undoubtedly in the 1960’s when Dr Chan Ah Kow was appointed the Club Coach. Dr Chan’s daughter, Patricia Chan became Singapore’s first “Golden Girl” and swimming icon in the 1960s up to the early 70s. Patricia remains one of the most decorated sportsperson in the region.

Committed to its legacy in swimming excellence, today the Club runs a base up swimming programme which provides learn-to-swim up to competitive level training for its 766 registered swimmers.
For more information on Chinese Swimming Club, please visit www.chineseswimmingclub.org.sg.

Bookings are closed for this event.